Global Dividend drop between -15% to 35% according to Janus Henderson

Dividends worldwide could fall up to 35% to $933 billion in 2020 due to the corona-virus, according to the latest Janus Henderson global dividend index report. The fund manager forecast is based on the analysis of companies that together account for more than 75% of global payouts.

The best-case scenario is that worldwide dividends are set to fall by at least 15% this year, this is a drop of $213 billion. Meaning that total global dividend payouts will be $1.21 trillion in 2020. In the worst case, dividends could fall even with 35% to $933 billion.

The fund manager estimates that more than 25% of the 1,200 companies screened in its Global Dividend Index have cut or deferred at least one dividend payment this year. 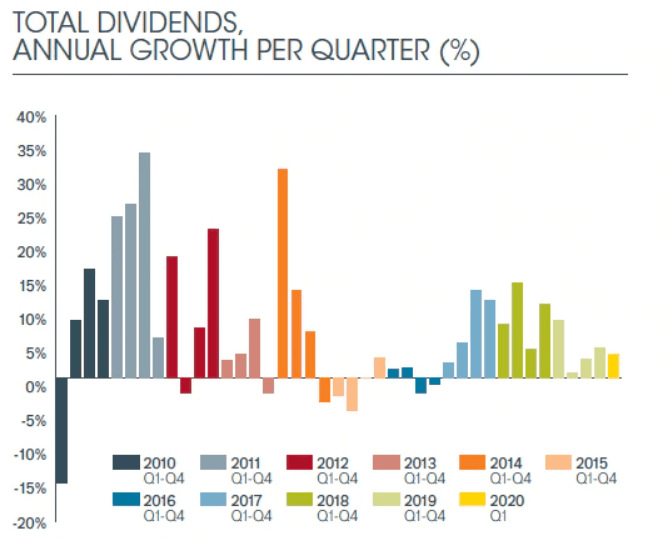 Europe and the UK most impacted

Janus Henderson said Europe and the UK are the most severely affected as regulators have forced banks to suspend dividends and a number of other major companies have already cut payouts. The impact is also higher in this region since European companies often pay a dividend only once a year.

Due to a favorable sector mix (e.g. high exposure to technology) and the suspension of share buybacks rather than dividend cuts, Janus Henderson said that  “North America and Asia are likely to see the least impact”.

Asian companies are also likely to see a limited impact on payouts this year because they have already fixed their 2020 payouts based on 2019 profits. There will be a noticeable fallout next year when weakened 2020 profits are announced.

Not surprisingly, Janus Henderson predicts that the impact on dividends will spread into 2021, and will show lower payouts than expected before the pandemic.

“Even so 2021 is likely to see dividend payments from a number of sectors resume, provided the growth in virus cases has peaked, the current government enforced lockdowns end, and the global economy starts to function and recover,” it said.