Dogs of the Dow performance November 2019

U.S. equities continued their way up in November, helped by optimism around trade talks with China. The S&P 500 gained 3.63%, its biggest monthly gain since June, and year-to-date the S&P 500 is up around 27.6% and just below all-time high records. The Dow Jones (DJIA) jump even 3.72%

The Dogs of the Dow are only up 11.8% in 2019, excluding dividends. Over the month of November, the dogs of the dow were even down -0.02% mainly due to the performance of Cisco and Coca-Cola. So, overall a major underperformance compared to the S&P 500 and the Dow Jones. The average dividend yield for the 10 Dogs is at present around 3.5%. 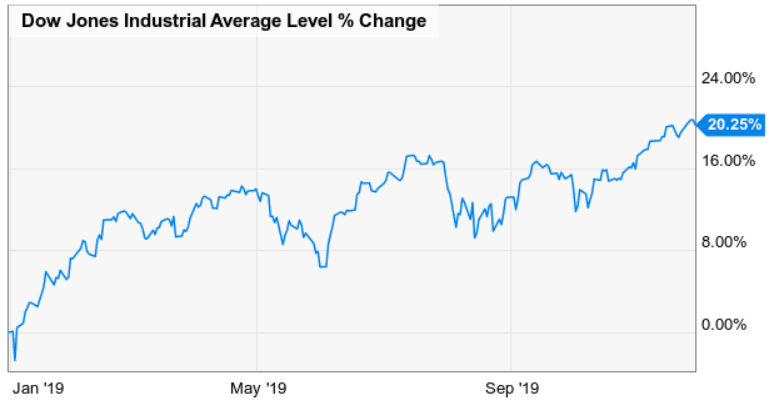 For the ten Dogs, November has been a mixed month again. This time, four of the ten Dogs of the Dow showed a negative performance in November.

So let’s have a look at the performance of the Dogs of the Dow individually for last month. The table below lists all 10 dogs of the dow 2019 companies, sorted descending by dividend yield and lists returns over last month, 3-, 6-, and 12-month periods and year-to-date.